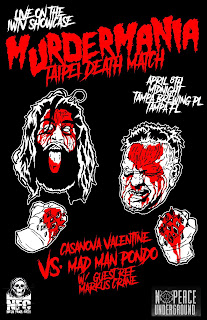 TreeHouse Lee pinned JJ Garrett after a spinning flying elbow drop off the top rope. Kit Osbourne ran in after and attacked Lee with a chair.

Shane Mercer won a 5-Way Hardcore Scramble Match over Jake Crist, Gary Jay, Lucky 13, and Neil Diamond Cutter by pinning Cutter with the Moonsault and Battery. This didn’t last long but it was wild. There were 4 doors set up in each corner of the ring to use as weapons including one that had vinyl records embedded into it like saw blades. Mercer dominated everyone at the start. He threw Cutter into the door with the records. He power bombed Jay into another one. Then he tossed Lucky 13 half way across the ring into a door. Finally, he took care of the last door by giving Crist a DVD on it. Everyone recovered and sent Mercer to the outside to take turns doing dives on him but it wasn’t enough to stop him in the end.

Lord Crewe and Otis Cogar beat Wolfe Taylor and Nolan Edward by pinning Edward together after driving him into part of door on the mat. They used the broken doors from the last match as weapons. After the match, Cogar brought out a pig skin and dropped it on Edward and Edward ran away in fear. Cogar and Crewe then abruptly left the ring to brawl with people in the crowd who seemed to be part of the Ruthless Pro Wrestling roster.

Tony Deppen pinned Jake Something with a roll up.

Parrow, Odinson, and Orin Veidt beat Colby Corino, John Wayne Murdoch, and Reed Bentley when Viedt pinned Corino after a DVD off the top rope into a door set up between two chairs in the ring. Odinson and Parrow took out Murdoch and Bentley with the Super Collider down on the floor before the finish.

Jamie Senegal pinned Ace Austin with a backslide. The first referee accidentally got bumped when Senegal hit him with a spin kick while aiming for Austin.

Casanova Valentine pinned Mad Man Pondo after sending him crashing into a barb wire door set up between chairs. Both guys bled. Pondo used his trademark stop sign as a weapon and Valentine used the garden weasel among some of the weapons. Markus Crane was the guest referee but he purposely didn’t do anything. He causally stood around and sipped a beer as they fought. After the match, a masked man ran in and attacked everyone. It turned out to be Atticus Cogar. Leon Scott ran in and made the save. Valentine got on the mic and challenged Cogar to a Death Match. I believe the announcers said it will take place on 5/5/21.