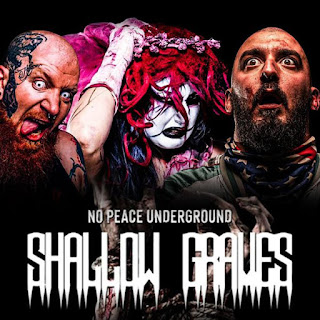 No Peace Underground “Shallow Graves” from Tampa, Florida, USA 🇺🇸 inside The Cuban Club on 4/10/21 live on FITE:

The show opens with a no ring Tornado Tag Team Match with Parrow and Odinson vs. Jake Something and Rohit Raju. Chairs and doors are laying around the building to use as weapons.

Odinson and Parrow used the Super Collider for Odinson to pin Raju and Something at the same time. Parrow was an absolute bloody mess and bleeding large amounts all over the floor. There were a lot of chair shots going on. It looked like he was cut on the back of his neck and he had tons of blood all down his back. His forehead was bleeding too.

After some video packages, the announcers said Bam Sullivan vs. Bobby Beverly would not take place because both guys are injured. The crew was shown trying to mop up all the blood on the floor from Parrow.

There is no ring at all for this event. It’s all Death Matches on the big floor.

AJ Grey pinned Hardway Heater after giving him a driver off the stage right through a glass table set up down on the floor. This was a blood bath and Heater looked like he needed medical attention. He was ushered off immediately to the back. His face and entire head was just covered in blood. Grey was bleeding too but not nearly as bad. The announcers said Grey worked about 9 matches during this WrestleMania Weekend. He worked a couple today staring at 11am EST with the Effy’s Big Gay Brunch event which was the first event of the day on FITE.

Erick Redbeard pinned Matthew Justice after the claw slam off the stage on top of broken boards and chairs on the floor. They shook hands and hugged after.

Mance Warner pinned Conor Claxton after stuffing syringes into Claxton’s mouth followed up by a running knee shot against a couple of light tubes to the head.

Jamie Senegal came out and said she would be the guest referee for the next match.

G-Raver pinned Su Yung after power bombing her into her own Undead Brides. There was confusion on if it was supposed to be the finish but G-Raver’s music played and he was announced as the winner. They brawled around at the start then the lights flickered with the music to signal the Undead Brides coming out. They set up a glass pane on chairs for Yung to use. G-Raver stuck tattoo needles into her head. Yung was angry from the pain and sprayed the red mist in his face. She managed to give him the Panic Switch into the glass pane but was not able to get the three count. After the match, Yung gave him the mandible claw then pour a bunch of thumbtacks on a chair. She shoved some of the tacks into his mouth. He recovered and gave her a brain buster on the chair covered in tacks then stormed off up to the stage. Senegal raised G-Raver’s hand as the winner but the announcers questioned if there was a miscommunication and if the match should have ended. They hoped to see a rematch either way. The Undead Brides collected Yung and carried her to the back.

Masada pinned Alex Colon after a DVD off the stage onto a barb wire board set up on the floor. Both guys bled.