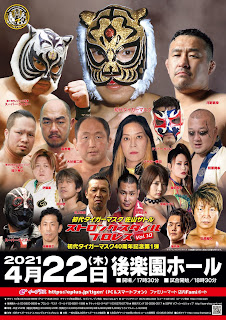 Super Rider and Ikuto Hidaka beat Jun Tonsho and Takafumi Ito when Hidaka pinned Tonsho after the Iwami Ginzan in 9:38.

Kazunari Murakami pinned Fuminori Abe after a kick in 7:13.

The original Tiger Mask Satoru Sayama came to the ring to speak to the crowd in celebration of his 40th Anniversary in pro wrestling as the Tiger Mask character (his career started in 1976). He said he hasn't been feeling well as we reported last year. He said he was happy to be there with the fans. Video well wishes were sent in from Stan Hansen, Riki Choshu, Tatsumi Fujinami, and others. He was given flowers in the ring. He talked about his matches against Dynamite Kid. He said he has good days and bad days with his health. There are plans to have a female version of Tiger Mask because Sayama has been impressed with the female talent. He needed assistance getting down from the ring because of his fragile condition.

Minoru Tanaka and Kendo Kashin beat Shinjiro Otani and Tatsuhito Takaiwa when Kashin submitted Takaiwa with an arm bar in 13:47.