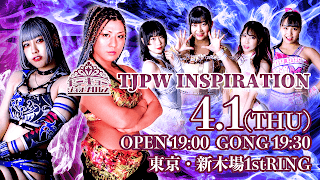 The concept of these Inspiration shows is a limited number of matches with lower ticket prices with special main events and stipulations. They announced the next Inspiration show is 7/1/21.

Rika Tatsumi pinned Raku after the Missile Hip in 10:26.

Rina Yamashita pinned Hikari Noa in a Hardcore Match in 19:05 with the Splash Mountain onto several chairs laying the ring. This was the company’s first hardcore match and one of the company’s best match of the year so far. At one point Yamashita gave Noa the Fire Thunder Driver off the ring apron right through a table on the floor. Several minutes later, Noa ran out of the ring and grabbed a broken piece of the table to use a weapon by smashing Yamashita in the head with it a few times. They used chairs, a ladder, a big board, and a bag full of plunder that included CDs as some of the weapons.

Hikari Noa pinned Mahiro Kiryu after the Uranage Throw in 7:16.

Miyu Yamashita won a 3-Way Match over Raku and Shiori Sena by pinning Sena after the Attitude Adjustment in 5:47.

Rika Tatsumi pinned Arisu Endo with the Twist of Fate in 10:08.