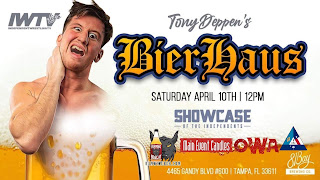 Tony Deppen came out to the ring to welcome everyone and opening the show. He will be doing the ring announcing. He did say it here but he announced on his social media yesterday that he will not be wrestling the rest of this weekend because he got hurt on a show a couple days ago.

Brayden Lee pinned Ace Austin with a hurricanrana. Austin was a sore loser and stomped him down afterwards.

Kasey Catel pinned Ava Everett after a low blow followed up by a draping spinning neck breaker on the ropes. This was bad indie booking. Today is Catal’s birthday. She came out accompanied by her husband Brandon Kirk. Everett came out with Tony Deppen and a birthday cake. They sarcastically sang The Birthday Song to Catal. The whole match was a set up to tease someone getting shoved in the cake as the decades old played stereotype. Kirk got on the ring to cause a distraction then Everett went out to the floor to confront him. Catal did a dive off the ring and landed on both of them. Everett ended shoving the cake into Catal’s face and threw some of it in Kirk’s face. So the person in the match with cake smeared all over their face still ended up getting the win.

Tank pinned 1 Called Manders after two Saito Suplexes on a pile of chairs in the ring. This was a Bar Brawl. Tank bled badly and Manders was all scratched up.

Simon Grimm beat Brandon Kirk by choke submission set up by a big pile driver. Kirk looked like his nose might have been broken because he was gushing blood from it after. Kasey Catal did not come out with Kirk for this.

Heather Monroe pinned Billie Starkz with a SuperPlex transitioned into the Michinoku Driver.

Jon Alba, the sports reporter in the Tampa area who occasionally works as a heel pro wrestling manager, came out with his Emmy Award to cut a promo. He answered the Open Challenge of Daniel Garcia on behalf of Charles Mason.

Daniel Garcia beat Charles Mason by Sharpshooter submission. Alba interfered a few times. Garcia refused to release the hold after the bell so Alba got in the ring and in his face to break it up. Garcia got into Alba’s face in return but didn’t strike him. Alba acted afraid. Mason then turned on Alba and put him in a choke hold for a bit. Garcia and Mason looked at each other with an intense look of respect then Mason left the ring. Garcia then grabbed Alba and put him in the Sharpshooter while holding up his Emmy as a taunt. A lot of this came off like trying to make the sports reporter who wants to be in the pro wrestling business a star.

Jordan Oliver pinned JD Drake with a float over reversal. Oliver appeared to be hurt and was having trouble getting out of the ring. Deppen and a few others went over to check on him and the show quickly went off the air.