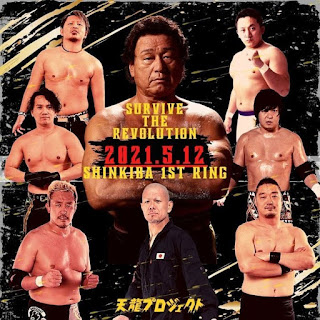 Masayuki Kono and TORU beat Kohei Sato and LEONA when Kono pinned LEONA after a Shining Wizard in 13:13.

Kikutaro beat SUSHI with the Prison Lock leg lock in 11:31.

Mammoth Sasaki and Hideyoshi Kamitani beat Kotaro Nasu and Keita Yano when Sasaki pinned Yano after the 29 Years Old in 15:11.

TSUBASA and HUB beat Yuya Susumu and Kengo when TSUBASA pinned Kengo after a shooting stomp in 16:18.

Tenryu was there after being discharged from the hospital on 4/29/21. The 71-year-old was hospitalized for over a month with heart issues. He was on commentary then went into the ring to address the fans.

The group will be bringing back the old WAR International Junior Heavyweight Title which had been retired since 2015. There will be a tournament to crown a new champion starting on 5/25/21 with Kikutaro, Kenichiro Arai, Kengo, HUB, TSUBASA, TORU, MAZADA, and brother YASSHI.