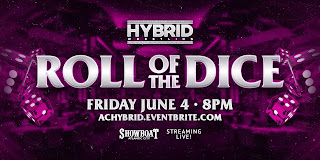 Hybrid Wrestling “Roll of the Dice” from Atlantic City, New Jersey, USA 🇺🇸 at The Showboat Casino on 6/4/21 live on YouTube:

Griffin McCoy beat Philly Mike Swanson after a pump handle driver. Tony Atlas was in the crowd watching and did some banter with McCoy afterwards. Altas got in the ring and McCoy jumped him but Atlas was able to recover to hip toss McCoy around then head butt him. Swanson ran back in to back Atlas up.

Tasha Steelz and Kiera Hogan beat Yoya and Janai Kai. The feed glitch and the finish wasn't shown. Hogan and Steelz has the Impact Knockouts Tag Team Titles with them.

Jimmy Lloyd pinned Conan Lycan with a One Winged Angel.

Masha Slamovich went to a No Contest with Holidead after they both crashed off the top rope into a board set up between chairs topped with a trash can. They continued to brawl after the bell once they recovered.

G-Raver pinned Gangrel after a Meteora. They shook hands after.