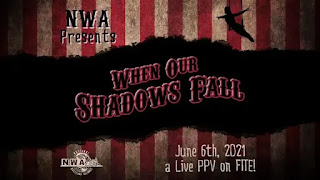 NWA results of “When Our Shadows Fall” pay-per-view results from Atlanta, Georgia, USA 🇺🇸 at GPB Studios on 6/6/21 live on FITE TV:

They advertised a pre-show that was supposed to air live for free on YouTube but that broadcast never happened.

Mecha Wolf and Bestia 666 won a 4-Way Tag Team Match over Parrow and Odinson... Sal Rinauro and Rudo... Slice Boogie and Marche Rockett when Rockett was pinned after a double team finisher. Parrow and Odinson gave an angry stare down to the winners after.

NWA TV Champion The Pope came out to confidently talk about his non-title grudge match against Tyrus.

Tyrus pinned The Pope with a heart punch using an object which apparently were brass knuckles handed off to him by Austin Idol at ringside.

Kylie Rae and Taryn Terrell beat Thunder Rosa and Melina when Rae pinned Melina by holding the tights after Rosa pulled Terrell out of the ring and carried her off to the locker room.

JTG pinned Fred Rosser with an inside cradle. They showed respect after the match.

Kamille won the NWA Women’s Title from Serena Deeb after a spear.

NWA Worlds Heavyweight Champion Nick Aldis beat Trevor Murdoch by Disqualification in a watered down lame version of a “Dusty finish”. Thom Latimer ran out to distract the referee and stood on the ring with a chair. Aldis then snuck up from behind and hit the referee in the back with another chair to knock him out of the ring. Murdoch was able to fight Aldis off and put him in a submission hold. The referee recovered and had the bell ring making everyone think Murdoch won by submission. Of course it was a swerve because the referee saw the chair in the ring and declared it a DQ victory for Aldis, by  foolishly thinking it was Murdoch who hit him with the chair instead.

Murdoch went to the interview desk and told Kyle Davis that he doesn’t know what more he can do against Aldis. He said he works hard and fights fair but Aldis is always one step ahead. He apologized to the fans and said he didn’t know what more to say.

The announcers were outraged. Velvet Sky acted choked up like she was going to cry for Murdoch. Joe Galli said to tune in to NWA Powerrr on Tuesday on FITE to see what happens from this next.