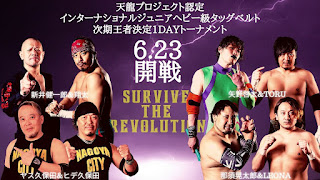 This show features the tournament for the vacant International Junior Heavyweight Tag Team Titles. The titles became inactive once the company closed back in 2015.

Kenichiro Arai and Shota beat Yasu Kubota and Hide Kubota when Shota pinned Yasu with a Gannosuke Clutch in a tournament match in 10:04.

Keita Yano and TORU beat Kotaro Nasu and LEONA when Yano pinned LEONA in a tournament match in 13:23.

Masayuki Kono and Kohei Sato beat Hideyoshi Kamitani and Kazumasa Yoshida when Kono submitted Yoshida with a Boston Crab in 15:14.

Yuya Susumu vs. Kengo ended in a Double Knockout when neither could answer the referee's count in 25:31. They traded a brain buster and Falcon Arrow at the finish and couldn't get up for the count.

Shota and Kenichiro Arai beat Keita Yano and TORU to win the vacant International Junior Heavyweight Tag Team Titles in the tournament finals when Arai pinned TORU after a jumping piledriver in 23:17.

On 6/12, HUB won the vacant International Junior Heavyweight Title in a tournament over Kengo.