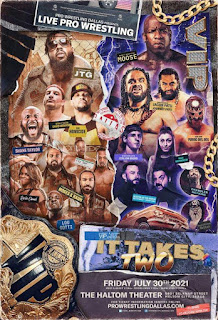 Nigel Rabid is the play by play announcer.

Tonight’s card features a Tag Team Titles Tournament with the winners of each match competing in a 4-Way Match main event for the vacant VIP Tag Team Titles. The titles were previously held by JTG and Shad Gaspard. They were vacated after the death of Gaspard.

The Besties in the World (Davey Vega and Mat Fitchett) beat Lou Gotti and Angel Camacho in a tournament match.

Chandler Hopkins and Magnificent Malico beat Tim Storm and Adam Asher by pinning Storm together after a twisted jackhammer by Malico and a Shooting Star Press by Hopkins in a tournament match.

Homicide and Chris Dickinson beat Moses and Kaun when Dickinson pinned Kaun after a double team finisher in a tournament match.

Fly Def (Warren J and Zack Zilla) beat Arez and Aramis when Arez was pinned after a double team finisher in a tournament match.

Stallion Rogers beat Shane Taylor by Count Out when JTG came out to distract Taylor. Rogers is the former Curt Stallion who is back on the indie scene after being released by WWE last month. After the match, Taylor got on the mic and said Rogers was “there” (WWE but he didn’t mention them by name) and he was put with a bunch of idiots who couldn’t do what he does. He said Rogers got hurt and then they released him. He said Rogers has heart which might get him back there again one day to do things his own way.

Rache Chanel and Madi Wrenkowski beat The MK Twins (Ashley and Steff) by a cheap Disqualification when Wrenkowski distracted the referee for Chanel to toss her purse at one of the twins and fall to the mat like she’d been hit with it. The referee turned around and thought the twins used it as a weapon and called for the bell. The twins got one of the loudest pops during their entrance that I’ve heard on an indie show in a few years like they were superstars. Wrenkowski and Chanel back jumped them after the match but they were able to fight them off. They were going to give both heels a Samoan Splash but they rolled out of the ring before it could happen. 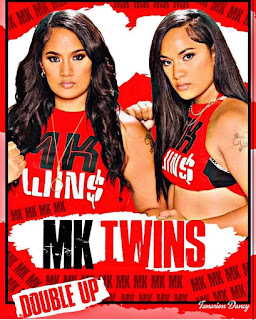 VIP Champion JTG went to a No Contest with Moose when Shane Taylor got in the ring and attacked JTG.The two had a brief pull apart. Taylor wants a title shot. The ring announcer said the referee ruled it as a no contest but it looked like JTG should have won by Disqualification.

The main event is Four Corners Rules where any tag team can tag in another team.