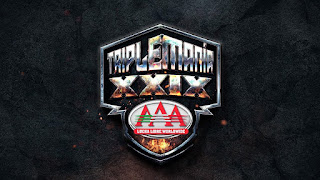 Hugo Savinovich and Jose Manuel Gullien are the broadcast team.

Leyenda America, Aracno, and Estrella Cosmica beat Terror Purrpura, Picudara Letal, and Venenoide after Aracno got the pin on Venenoide when El Furioso bust out of a stage wall and got in the ring to have a stare down with Purpura. This was the Marvel Comics offering match.

Iguana was attacked in a big angle during his victory celebration by NGD (El Cuatrero, Forastero, and Sansón). NGD left CMLL a few days ago. Carta Brava Jr., Tito Santana, and Mocho Cota Jr. tried to make the save but Sam Adonis, Puma King, and DMT Azul joined NGD to beat everyone down. (NGD will also be working The Crash show on 9/11/21).

Impact Wrestling Knockouts Champion Deonna Purrazzo beat AAA Reina de Reinas Champion Faby Apache to win the title. Lady Shani was the second for Apache. Lady Maravilla was the second for Purazzo. Rudo referee Tirantes was the man in charge of the action and he continued his never ending feud with Apache. He cheated for Purrazzo and Maravilla interfered. Apache was distracted by the interference which allowed Purrazzo to get her in a piledriver. Shani tried to get in the ring to help Apache but Maravilla drop kicked her to stop her in her tracks. Purrazzo applied the arm bar and Tirantes called for the bell declaring her the winner.

They showed a backstage segment where Konnan went to Andrade El Idolo’s dressing room door to talk with him but Andrade refused and slammed the door. Konnan then went to Omega’s dressing room and told him he thinks he can find a way to help him win. Omega let him in and closed the door so the cameras couldn’t see anything more

Sam Adonis, Puma King, and DMT Azul beat Pagano, Chessman, and Murder Clown when Puma pinned Chessman after a powerbomb. Pagano and Chessman got into a shoving match on the stage blaming each other for the loss afterwards but Murder Clown broke it up quickly.

The AAA Mega Championship match is next. Champion Kenny Omega came out with Konnan. Ric Flair was a surprise guest accompanying Andrade to the ring. Flair had his usual Also Sprach Zarathustra theme music when he came out.

AAA Mega Champion Kenny Omega pinned Andrade El Idolo after hitting him with the title and the Ome Winged Angel when referee Tirantes allowed himself to be distracted by Konnan on the ring. Tirantes got bumped during the match when Omega knocked Andrade into him and into Konnan on the ring. Flair stopped Omega from using the title as a weapon while Tirantes was down. Flair chopped Omega and punched him to knock him down to the mat. Konnan ran in the ring but Flair chopped him too and put him in the figure four leg lock. Andrade followed Flair by putting Omega in a figure four. After the match, Flair went up to the broadcast table and shook hands with the announcers. Hugo said “I love you my brother”. Andrade signaled that he wanted a rematch against Omega.

The company paid tribute to Brazo de Plata and others who passes away this year.

Pyscho Clown pinned Rey Escorpion in the hair vs. mask match. Goya Kong was in the corner of Pyscho. She is his sister and the late Brazo de Plata is their father. At the end of the match, Goya turned on Pyscho with a kick to the groin but he was able to overcome to get the win. Escorpion was a gentleman in defeat. He told Pyscho to go on and do big things in AAA after this. He honored the stipulation and had his daughter do part of the hair cutting. Pyscho thanked Escorpion for the match and the fans for their support. He shook Escorpion’s hand and raised his hand as the show went off the air.