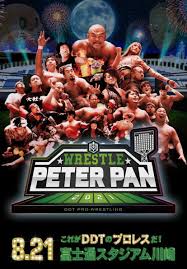 Yukio Naya and Keigo Nakamura beat Hideki Okatani and Yuya Koroku when Naya pinned Koroku after a chokeslam in 10:38.

Kenta Kobashi came out to the ring to officially open the event. This is an outdoor show.

The double ring singles match with Antonio Honda vs. Toru Owashi, and Danshoku Dino vs. Kazuki Hirata ended up as a 6-man tag team match after a couple restarts. The first one happened after quick pins from Owashi and Dino..There were two referees and they ended up getting into the brawl after the restart. DDT Executive Producer Hisaya Imabayashi ruled it a no contest then he put on a referee shirt. He said the double ring gimmick was over and the match would only be in one ring now. He ordered referee Daisuke Kiso to team with Owashi and Honda, and referee Yukinori Matsui to team with Dino and Hirata. Kiso pinned Matsui with an inside cradle for the win.

Chris Brookes and Jun Kasai beat Shunma Katsumata and MAO after a simultaneous pair of Praying Mantis Bombs on both guys in a pile of Legos in a hardcore match in 14:03.

Daisuke Sasaki won the DDT Universal Title from Yuki Ueno with the Mistica Cross Face in 17:10. Ueno was a bloody mess and took a beating for most of the match. Mad Paulie was in the corner of Sasaki and interfered a couple times.

Konosuke Takeshita won the KO-D Openweight Title from Jun Akiyama by submission with a modified Chicken Wing Facelock in 24:43. Chris Brookes came out to challenge Takeshita as the first defense. It will happen at Korakuen Hall on 9/26/21.