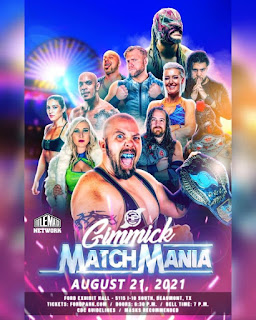 Billy Wayne and Chris Syndel won the HPW Tag Team Titles over Tama Ku and Jordan Jensen (the champions) and Alexander Frey and Scott Murdoch in a Tornado Tag Match when they pinned Jensen after their double team finisher. Ricardo Cage ran out at the finish to attack Frey and brawl to the back. Jensen shoved Ku and blamed him for the loss but they hugged and made up.

Jared Wayne beat Nathan Bradley in a Submission Match with a Texas Cloverleaf.

Heather Monroe and Ray Lyn beat LoverBoy Nate Andrews and Marina Shafir in an Intergender Match when Monroe submitted Andrews to a Muta Lock while Lyn stopped Shafir on the outside from making the save.This was the independent wrestling debut for Shafir who was released by WWE back in June. Andrews got on the mic afterwards and blamed her for the loss. He shoved her and she put him in her submission finisher then walked to the back stoically. Andrews got on the mic again and challenged Heather Monroe to a singles match next month. He said if he beats her she has to be his servant but he’ll put on a dress if she doesn’t.

Edge Stone pinned HPW Heavyweight Champion Ryan Davidson to win the title in a Dog Collar Match after punching him in the face with the chain followed up by his finisher.

Next show is September 18.