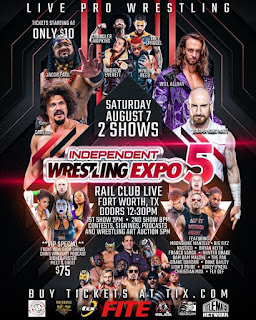 Independent Wrestling Expo 5 from Fort Worth, Texas, USA 🇺🇸 at the Rail Club Live on 8/7/21 live on Title Match Network:

Cam Cole pinned Matt Vandagriff with an inside cradle after Mysterious Q ran out to ringside and pushed Vandagriff off the top rope. Q cut a promo and said it would be him vs. Vandagriff on Show 2.

The P.AK.(Apex and Shane Stratmore) pinned Mathayus and Chavy Chulo when Apex pinned Chulo. Mathayus was pulled off the ring by the heels and their manager Matt Marvel so he could make the tag or the save.

Moonshine Mantell and Bam Bam Malone beat Fly Def (Warren J. and Zack Zilla) by Count Out when everyone was brawling on the outside and Mantell rolled in the ring to beat the count for his team.

Fuego Del Sol pinned Hunter Drake after the Tornado DDT off the second rope. Real good match with toms of back and forth fast paced action. Drake has the same style so they were evenly matched. After the match, Apex of The P.A.K. attacked Del Sol. Matt Marvel said Apex wants a match with Del Sol on Show 2.

Will Allday pinned Marquise Jackson after a super kick in the Show 1 main event. Jackson was a last minute substitute for Jacob Fatu.

Tickets are still available for Show 2 which starts at 8pm CST.