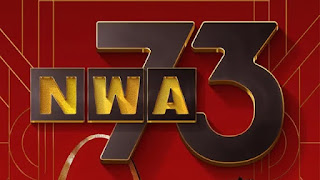 May Valentine interviewed Jax Dane at ringside. He said he is not injured but he's not wrestling on the card tonight by choice. He teased going after one of the titles as the Championships Series winner tonight. He said he’s rooting for his tag team partner Crimson and thinks Crimson should move on in his career on his own.

Allysin Kay, Marti Belle, and Lady Frost beat Taryn Terrell, JennaCide, and Paola Blaze when Frost pinning Blaze after a moonsault (after a blind tag on Belle to steal her pin) in the pre-show match. Kay and Belle won the vacant NWA Worlds Women’s Tag Team Titles in the tournament last night at NWA Empowerrr.

Austin Idol was interviewed at ringside by Valentine. He put over the great wrestling city of St. Louis and called himself the gateway of the NWA. He said there are no obstacles for Tyrus other than he might get bored from beating everyone else up.

Conrad Thompson is on commentary with Joe Galli and Velvet Sky. They confirmed that Ric Flair is in the building and we’ll see him later.

Jax Dane attacked Crimson during the entrance of “The Brawl In The Lou” and beat him up with a ladder leaving Thom Latiner and Tim Storm one on one.

Tim Storm won a 3-Way “Brawl In The Lou” over Thom Latimer and Crimson by pinning Crimson after the Perfect Storm. Latimer did a senton off of a huge ladder in the aisles onto Storm through a sandwiched guardrail. Crimson came back out to check on Storm and finally entered the match.

Mickie James pinned Kylie Rae after a DDT. A masked person ran in and attacked James after the match. She unmasked and it was Deonna Purrazzo. She gave James the package piledriver. Rae recovered from the DDT and ran Purrazzo off. The crowd chanted “Thank You, Mickie!” before the match for last night's epic NWA Empowerrr which she executive produced.

Austin Idol came out to the ring with two women and his was holding a title belt. Galli said it’s an unsanctioned title that Tyrus wants to represent for 6-man champions. He said Tyrus claims he bought old title belts previously held decades ago by Ric Flair and Harley Race and melted them all down into one title belt.

Tyrus, The Masked Man, and Jordan Clearwater (with Austin Idol) beat The Pope, Parrow, and Odinson when The Masked Man pinned Odinson after blind tagging himself in after Tryus used the Heart Punch on The Masked Man. BLK Jeez ran out and distracted Parrow at the finish

NWA National Champion Chris Adonis pinned James Storm by using feet on the ropes. Storm thought he won seconds earlier after the super kick but Adonis got his leg on the rope to break the count.

Kyle Davis brought out Ric Flair to the ring. Flair did not have his usual music. He was left with the mic in the ring alone.

Flair said the NWA will never die as long as he’s alive because he’ll never let people forget it. He said he was home because he once lived in the city. He said Billy Corgan said he could do and say whatever he wants. He thanked his wife Wendy, HHH, HBK, Undertaker, Steve Austin, and Vince McMahon for always picking him up. He said Vince probably wouldn’t see this show but he’ll hear about it and will know Flair is always wherever he wants to be. He said HHH grew up an NWA fan and has an NWA Title in his office, not a WWE Title. He told a Bruiser Brody story of Harley Race and himself never knowing what Brody was going to do until he was ready. He talked about wrestling Harley Race, Brisco, Ted DiBiase and many others there. He said Sam Muchnick gave a great payday but he’d spend a lot of it on tips traveling all over the place as NWA Champion. He said wrestling needs brands because not everyone can go to WWE or AEW but they can come to places like the NWA. He said he wanted Randy Orton to break his title record until Charlotte reached 12 title runs. He said many wrestlers he worked with the last couple of decades grew up as NWA fans. He thanked the fans repeatedly and all the wrestlers who showed him respect in his career.

Konnan came out as the manager of Mecha Wolf 450 and Bestia 666 for the tag team titles match.

Bestia 666 and Mecha Wolf 450 beat NWA Worlds Tag Team Champions Aron Stevens and JR Kratos to win the titles by pinning Stevens after a double team finisher thanks to a distraction by Konnan. After the match, Konnan got on the mic and said it was a great time to be a pro wrestling fans because years ago companies didn’t work together like this to give inter promotional matches. He put over the NWA Women’s Show last night. He said when he broke in there wasn’t that many women, African-Americans, Hispanics, or LGBTQ but now it is professional wrestling for everyone.

Trevor Murdoch pinned NWA Worlds Heavyweight Champion Nick Aldis after a piledriver followed by the flying bulldog to win the title in the title vs. career match. Murdoch wins the title and keeps his career. Aldis loses the title. Wild brawl of a match that took several minutes to officially start because they brawled in the crowd and on stage. Billy Corgan came out and yelled at Aldis to get in the ring or lose the title. They got into a shoving match. The first ref was bumped so Aldis used the opportunity to give Murdoch the flying elbow off the top rope through a table on the floor.

Ric Flair and Murdoch’s family got in the ring to congratulate Murdoch. Flair said Murdoch did Dick Murdoch and Harley Race proud. He told him to be a champion and said he and Aldis put on a clinic.

Murdoch thanked the crowd and thanked Harley Race for believing in him and getting him there. He said he doesn’t know what his future holds but thanks the fans for supporting the NWA and him.

The main event, women’s title match, and Ric Flair’s speech saved this show. It was way too long with lots of stuff that dragged. NWA Empowerrr was by far the best show of the weekend.