The Assassin Is In Declining Health 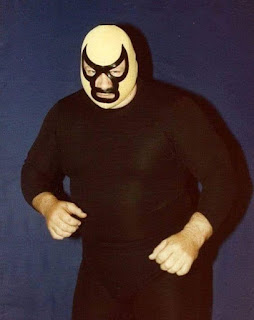 The Assassin/Assassin #1 (Jody Hamilton) is currently in hospice care. He is 82.

The famous heel tag team The Assassins started in the early 1960s with Tom Renesro as Assassins #2. When Renesto retired as a full time wrestler in the mid-1970s, Hamilton continued the masked tag team with various other people under the mask in the role of Assassin #2. Some of the famous names in the gimmick were Randy Colley, Hercules Hernandez and Nick Patrick (Hamilton’s son). The Assassins were regulars in Georgia Championship Wrestling and other southeast and southern territories. Paul Jones was their manager at times. The masks would come into play as weapons during matches. The Assassins would insert foreign objects in them so they could deliver “knockout headbutts” to their baby face opponents when the referee wasn’t looking.

Hamilton was forced to retire after suffering a broken back during a match in the late 1980s. He joined WCW in the start of Ted Turner’s ownership of the company. He did everything in WCW from booking, being a heel manager on TV (as The Assassin), and training wrestlers. Up until  the later years of the Monday Night Wars, WCW pay-per-views would run credits at the end of broadcasts which showed the names of everyone who booked and produced the events under their real names. Hamilton’s name was regularly on display.

He was the head trainer at the WCW Power Plant. A few years after WCW folded he restarted his Deep South Wrestling promotion that became a developmental territory for WWE until 2007.