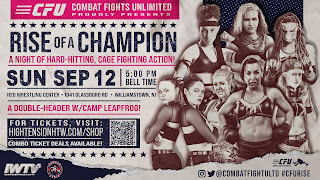 Combat Fights Unlimited “Rise Of A Champion” from Williamstown, New Jersey, USA 🇺🇸 at the H2O Wrestling Center on 9/18/21 on IWTV:

All matches are inside a steel cage with MMA rules.

Travis Huckabee beat Yoya by referee stoppage TKO after a grounded Stretch Muffler and kicks. This was a special men’s preliminary bout.

Ray Lyn beat Adena Steele by knockout with a jumping knee strike in Round 2. This was a preliminary bout.

Lindsay Snow beat Little Mean Kathleen by knee bar submission in about 15 seconds of the First Round. Kathleen came out to the cage but she wasn’t even scheduled on the card for a fight. She demanded a fight. Snow was doing color commentary on the broadcast and left the announcers area to accept the challenge. Play by play man Blake Chadwick said it wasn’t an official bout.

Bonesaw Brooks beat KZT by referee stoppage TKO after strikes in Round 3.

Edith Surreal beat Shea McCoy by judge’s majority decision after Round 3. McCoy was a sore loser and attacked Surreal and the referee over the decision.

Seishin (aka Tootie Lynn) beat Becca (seconded by Little Mean Kathleen) by knockout after a karate kick in two seconds of Round 2.

*Robyn Renegade (seconded by twin sister Charlette Renegade) beat Notorious Mimi by knockout with a back fist blow in Round 3. The Renegade Twins did a “twin magic” switch in the cage while the referee was distracted by checking on Mimi over in her corner. *It was actually Charlette posing as her identical twin in Round 3 to pick up the win. The officials were none the wiser and the decision stands.

Masha Slamovich (seconded by Julius Smokes) beat Janai Kai (seconded Yoya) in the main event to win the inaugural CFU Championship by referee stoppage TKO in Round 5 with ground and pound strikes.

Slamovich cut a profanity laced victory promo. She said she’s the first champion and will make sure she stays the only champion. She told everyone who ever doubted her to “eat shit”. She is also the GSW Women’s Champion and the GSW Soul of Syndicate Champion and she had those belts with her too on this show.