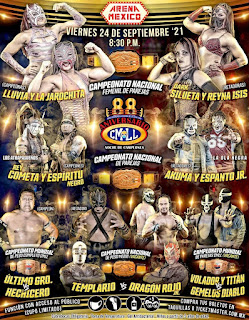 Volador Jr. and Titan beat Los Gemelo Diablos to win the vacant CMLL World Tag Team Titles by pinning both of the twins at the same time.

Mexican National Women’s Tag Team Champions Jarochita and Lluvia beat Reyna Isis and Dark Silueta by submission. This was the first time that the women’s division have ever been in the main event of a CMLL Anniversary event.

Japan’s Tsukasa Fujimoto, Tsukushi Haruka, and Momo Kohgo are headed in for CMLL action starting on 10/1/21.