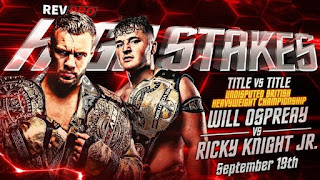 Intermission- the Undisputed British Women’s Title match with a 2/3 falls stipulation will be on after.

After the match, Shaw had nice words about Hyan (who is returning home to America soon) and wished her a Happy Birthday. Debbie Keitel came out and interrupted Shaw. She wants to be the next challenger. She threw a cup of coffee in Shaw’s face then gave her a front leg sweep face first to the mat. Hyan ran back to ringside and tried to make the save but Keitel cut her off from even getting in the ring and gave her a rope hanging pedigree.

PWA Tag Team Champions Kyle Fletcher and Mark Davis won the Undisputed British Tag Team Titles from Michael Oku and Connor Mills when Fletcher pinned Oku after the Fidget Spinner. We’re told the fans in the building were raving about the match and many are calling it a match of the year candidate.

After the match, Osprey attacked RKJ then Shota Umino ran in to save. Ethan Allen and Luke Jacobs then ran in until Kyle Fletcher and Mark Davis evened things up. But they turn and join Osprey.

Thanks to Spencer Bentley for sending in the great results report. This should be up on RPW On Demand within a couple of days.