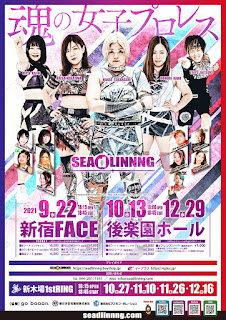 There was a tribute and moment of silence for Rumi Kazama who passed away at 55.

Fans got to vote on what title match they want to see as they main event and they chose Beyond The SEA Champion Ryo Mizunami vs. Yuu. Makoto and ASUKA will defend the Beyond The SEA Tag Team Titles against Hiroyo Matsumoto and Nanae Takahashi in the co-main event.

Itsuki Aoki won a 3-Way Match over Thekla and AKARI by pinning AKARI.

Arisa Nakajima and Rina Yamashita beat Tsukasa Fujimoto and Hanako Nakamori when Nakajima pinned Nakamori after a big headbutt followed up with the D x D.

Hiroyo Matsumoto and Nanae Takahashi won the Beyond The SEA Tag Team Titles from Makoto and ASUKA when Matsumoto pinned ASUKA after the Rock Drop in 23:41.

Beyond The SEA Champion Ryo Mizunami pinned Yuu in 19:35 after the diving guillotine drop. Arisa Nakajima challenged Mizunami after the match.

Fujimoto hurt her head during the tag match. She put an ice pack on it after it ended and continued to put it on periodically while watching the rest of the show near the locker room. 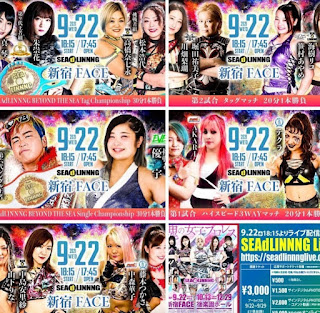