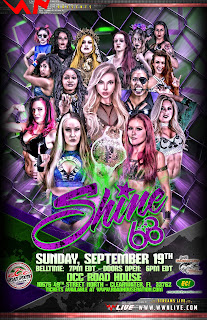 Trevin Adams and Alyssa Marino open the show in the ring. They introduced Ayla who will be the ring announcer for the evening. Adams and Marino are the broadcast team.

Amber Nova pinned Kaci Lennox after what looked like a stunner that Marino called the Nova Driver. Nova drove up to the venue in a red 1973 Chevy Nova. Ayla interviewed her in the ring after the match. She once again said she’s coming straight for the SHINE Nova Title.

Tracy Nyxx pinned Alyx $ky after a rake of the eyes and flying Code Breaker off the ropes when the referee was shoved out of the way and temporarily blinded. Nyxx arrogantly refused to give Ayla an interview afterwards and strutted off to the back.

The OCC Street Fight for the SHINE Nova Title with Natalia Markova vs. The WOAD is next. The crew put trash cans filled with weapons in the ring to use.

The WOAD pinned Nova Champion Natalia Markova to win the title after a power bomb off the ring into a table on the floor followed up by the hip attack finisher into a table in the ring set up in the corner. It was a wild match with nonstop action. Markova was bleeding the hard way from the side of her head. They used kendo sticks, chairs, trash cans, crutches, and a ball and chain among the weapons. At one point Markova poked The WOAD in her good eye and then put a trash can over The WOAD’s head. She hit the trash can several times with a kendo stick followed up by a shining wizard into it for a near fall.

After the match, The WOAD began to choke Markova with a crutch. The returning Santana Garrett ran in and made the save. Garrett cut a promo and said she’s been on a hiatus for a bit (she was in WWE NXT for a couple of years and released in June 2021). She said she’s looking to put her name back on the map in SHINE. She said the Nova Title is the only title she hasn’t held yet in the company and she wants it.

Intermission to clean the ring.

ACR pinned Katalina Perez after a roundhouse kick to the head. ACR told Ayla that people have been wanting to see her bring the “A Game” and she started the “A Game”.

The Coven members Erica Torres and Chelsea Durden beat Kelsey Raegan and Sahara Se7en when Raegan was pinned after a double team finisher when Vipress got on the ring to cause a distraction. Se7en was knocked to the floor for the longest time and couldn’t make the save. Raegan was unconscious after the match and carried off to the back by The Coven in ritualistic fashion. Se7en was helped up off the floor and to the back by the referee. Trevin Adams said The Coven’s Harlow O’Hara is out with an injury and not at the show. She was originally supposed to be the tag team partner of Erica Torres in this.

Marti Belle pinned Stormie Lee by holding the ropes when Lee tried to roll her up in the corner. Ayla said Belle earned herself a shot at the SHINE Tag Team Titles against Stormie Lee and Kimber Lee with this singles win. Belle refused to tell her who her partner is going to be when the title match happens. She’s held it twice with Jayme Jameson but she is currently half of the NWA Worlds Women’s Tag Team Champions with Allysin Kay.

Intermission to set up the steel cage for the main event. Ayla says the rules of the cage match are pin or submission or escaping the cage.

Marti Belle is out accompanying Allysin Kay to the cage. Ivelisse comes out by herself and with the SHINE Title, Ladies Night Out Title, and the SWE Women’s Title. Trevin Adams notes that Kay and Belle are the NWA Worlds Women’s Tag Champs.

SHINE Champion Ivelisse beat Allysin Kay by climbing out of the cage. Stormie Lee ran out and slammed the cage door into Kay’s head and then stopped Belle from trying to prevent Ivelisse from touching the floor. Ivelisse paid tribute to Daffney in her victory interview. She said Daffney helped her during a dire time and she’ll never forget that.

They showed a graphic of Daffney to close the show.