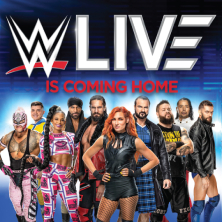 Finn Balor, Rey Mysterio, and Dominik Mysterio beat Seth Rollins, Dolph Ziggler and Robert Roode when Balor pinned Ziggler after Coup de Grace. It started off as a regular tag match that ended in a Disqualification when Seth Rollins got involved. Finn Balor then came out to turn in into a 6-Man Tag.

Drew McIntyre pinned Jinder Mahal in a London Street Fight after powerbombing him through a table in the ring followed up by the Claymore Kick. McIntyre spoke to the crowd after the win. He said even though it’s technically a Smackdown tour and he’s on Raw, he asked management to let him be on it. He said he will do whatever he can to help bring the UK a major WWE pay-per-view. He brought up that the last major WWE ppv event there was SummerSlam 1992 and next year is the 30th Anniversary of that. He told the crowd to keep comimg to UK shows and making noise to show Vince McMahon and WWE they want to have a ppv in the UK.

Becky Lynch was shown on the big screen and did a promo to hype the main event on the show. It will be her vs. Bianca Belair.

Kevin Owens pinned Baron Corbin (aka Happy Corbin) after a stunner. A fan jumped the guardrail during the match but security quickly stopped him and took him away. Owens cut a promo on the guy and asked the crowd if it was Logan Paul.

NXT UK Women’s Champion Meiko Satomura and Jinny were at the show watching.

Thanks to Spencer Bentley for the results.