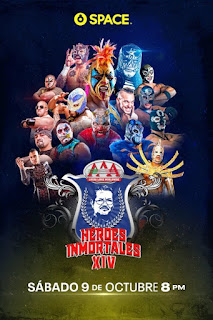 They taped matches and segments before the live broadcast for airing next week. Psicosis is the leader of a Los Vipers stable with Abismo Negro Jr., Latigo, and Chik Tormenta, and Toxin.

The Copa Antonio Pena Match is up first on the live show with Villano III Jr., Sexy Star, Arez, Keyra, Mamba, Pimpinela Escarlata, Toxin, Argenis, Keyra, and Aero Star. The rules are pin, submission, or over the top rope for eliminations.

Pimpinela Escarlata won the Copa by pinning Mamba last. Referee Tirantes Sr. came out to present the trophy cup. Mamba then attacked Escarlata but Mr. Iguana made the save.

La Empresa were shown on the big screen backstage brutally attacking people including Monster Clown who is supposed to be in the cage match main event with Psycho Clown and Murder Clown vs. Sam Adonis, Puma King, and DMT Azul (La Empresa).

Sanson, Forastero, and Cuatrero (NGD) beat Tito Santana, Mocha Cota Jr., and Carta Brava Jr. (Poder Del Norte) when Brava Jr was pinned. Goya Kong was in the corner of PDN and got involved a bit giving a splash to one of the NGD members.

They showed Psycho Clown and Murder Clown backstage talking about Monster Clown not being able to compete with them in the cage match after the earlier attack. Dave The Clown walked up and offered to be their partner. They didn’t trust him.

Tirantes Sr. is the referee for the AAA World Tag Team Titles match.

AAA World Tag Team Champions Pentagon Jr. and Fenix beat Hijo Del Vikingo and Laredo Kid when Vikingo was pinned after a double team finisher. This was fantastic with tons of innovative high risk from Vikingo and lots of near falls with slow counts by Tirantes Sr. After the match, Dragon Lee and Dralistico showed up to challenge The Lucha Brothers. It was assumed going into this show that Dragon Lee and Dralistico could be the “masked tag team” being teased by Andrade for AEW on 10/16/21 but there was no mention of AEW in the promos after the match.

The cage match main event is up next so there’s a lot of commercials while the cage is being set up. They showed an ad for AEW Dynamite airing on Space on 10/16/21.

Estrellita is out leading La Empresa to the cage and dressed up as Harley Quinn complete with carrying a baseball bat. Psycho Clown and Murder Clown are out by themselves with no partner so far. All members of a team must escape the cage to win the match.

The rudos immediately get the advantage 3 on 2 with chairs and tables in the cage to be used as weapons. Estrellita crawled up to the top of the cage and is sitting up there acting as a cheerleader.

Dave The Clown ran down and climbed into the cage a couple minutes into the match to even things up.

Estrellita did a huge flying body press off the cage on all three members of The Psycho Circus. She cautiously climbed back up to continue cheering on.

Psycho Clown and Murder Clown escape the cage leaving Dave to take a beating by himself in the cage against the three rudos.

Sam Adonis climbed out of the cage and hit Psycho and Murder with a chair at cage side as they were distracted by Estrellita.

Puma King and DMT Azul handcuffed Dave The Clown to the ropes and took his mask then climbed out of the cage for La Empresa to win the match.

The announcers said Cain Velazquez is coming in for the 12/4/21 show.