Aja Kong Will Be Sidelined After Surgery 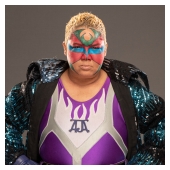 Aja Kong was supposed to have a milestone 35th Anniversary Show this fall but it’s been postponed due to a worsening right knee issue and the ongoing virus pandemic limiting crowd capacity at events.
Kong announced she will be having joint replacement surgery on the knee soon. This is the second knee surgery for her in two years. She's expected to be hospitalized for a few weeks with recovery and rehabilitation. It will keep her out of action for an indefinite period of time.
Kong and Moka Miyamoto were victorious this weekend on Tokyo Joshi Pro Wrestling’s “Wrestle Queendom II” over Miu Watanabe and Yuki Arai when Kong pinned Arai after the diving elbow drop off the second rope. The match can be seen on the newly revamped WRESTLE UNIVERSE.
The 51-year-old was trained by AJW and made her debut in 1986 as Erika Shishedo. She would become known Aja Kong a few years later. In her career she has won every major title in AJW, GAEA, ARSION, Sendai Girls, Diana, and OZ Academy as well as titles in other promotions. The Wrestling Observer Newsletter inducted her into their Hall of Fame in 2006.