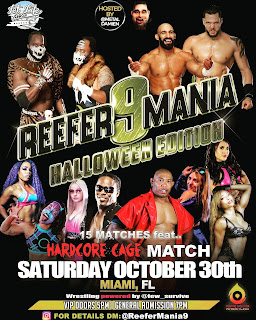 Lucky Ali pinned Benjamin Jason Woods with an inside cradle.

Movie MKV pinned Santana by using feet on the ropes.

Haitian Hurricane Reggie Rhythm came out and said he’s been there since 3pm but doesn’t have an opponent. He demanded a match. Reign Rivers came out to accept the open challenge. (Rivers trained at The Nightmare Factory).

Reggie Rhythm pinned Reign Rivers after a rolling neck breaker in an intergender match. JB Cool came out to defend Rivers after the match and he laid out Rhythm.

The Pope pinned Izaiah Zane (the current Elev8 Uprising Champion) after a SuperPlex.

Hollyhood Haley J pinned Tana Lee with a roll up and holding the tights.

F.E.W. Tag Team Champions Da Russell Twins won a match but I didn’t get the name of their challengers because the stream stopped for several minutes. A notice popped up saying the broadcast was suspended because of policy violations..

Crystal White pinned Gypsy Mac in a Street Fight after a Samoan Drop.

Panther Rodriguez pinned Joey Chaos in a Hardcore Match after a pile driver into chairs. Chaos was attacked after by Damien Metal who was working as the ring announcer. It was an impromptu short match with Metal getting the pin.

Cruiserweight Champion Brian Atomic pinned Cruz after a shining wizard in the corner.