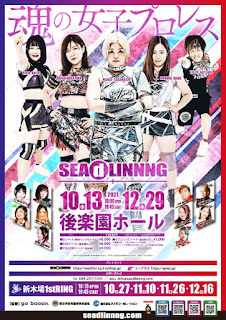 DASH Chisako pinned Riko Kaiju after the Hormone Splash in 7:28.

Leon won a 3-Way Match over AKARI and Mei Suruga by pinning AKARI in 9:57. The guest referee was Momoe Nakanishi.

Yumiko Hotta, Rina Yamashita, Itsuki Aoki, and Riko Kawahata beat Makoto, Yuna Manase, Asuka, and Riko Kaiju when Yamashita pinned Kaiju after the Impact in 13:00. Yamashita announced she’s leaving for America and will be back on the 12/29/21 show at Korakuen Hall. She will debut for GCW in Detroit at the Knights of Columbus on 11/12/21 against Charli Evans who will also be making her GCW debut that night. It will air live on FITE.

Nanae Takahashi and Hiroyo Matsumoto beat Masato Tanaka and Yuu when Matsumoto pinned Yuu after the Rock Drop in 18:52.

Hanako Nakamori pinned Arisa Nakajima in 22:33. After the match, Nakamori wanted Nakajima to be her tag team partner for a run at the Tag Team Titles in the upcoming #1 con. Tag Team Titles tournament starting on 10/27/21. Nakajima refused at first then reluctantly agreed after being talked into it. Nakajima is already set to face Ryo Mizunami for the Beyond The SEA Title on 12/29/21.