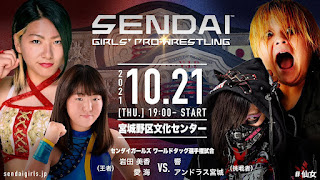 DASH Chisako pinned Kanon after a brain buster in 8:38. After the match, Kanon said she wants to try to win the Sendai Girls Junior Title while she is still in junior high.

Chihiro Hashimoto and Yuu beat Ayame Sasamura and Ami Miura when Hashimoto pinned Miura after a lariat in 16:39.

Hibiki and Andras Miyagi beat Sendai Girls Tag Team Champions Mika Iwata and Manami to win the titles when Miyagi pinned Manami after the Tombstone Piledriver in 15:40. Miyagi challenged Iwata to a singles match afterwards. Hibiki wanted a match with DASH Chisako. Chisako agreed and it will be a Hardcore Match. Those matches will take place on 11/28/21. Chihiro Hashimoto and Yuu then challenged the new Tag Team Champions to a match on 11/23/21.