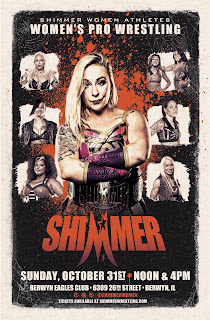 The roster came out to ringside and there was a 10-Bell Salute for Daffney who passed away on 9/1/21.

Dave Prazak addressed the crowd. This is the first SHIMMER event since last October when they were part of the big weekend of pro wrestling shows at The Collective in Indianapolis.

Heather Monroe and Ray Lyn have been working as a tag team on the indie scene. They call themselves Blonde Force Trauma. They want a future tag team titles shot at Vox and Exo.

Zoey Skye pinned Heather Monroe but was immediately attacked by Ray Lyn afterwards. Vox and Exo ran out to make the save. This set up the tag titles match for the 4pm show.

Nicole Savoy beat Janai Kai by submission. After the match, Savoy said she would like to be a tag team with Kai. Kai agreed. Allysin Kay and Marti Belle came out and wanted a tag team match against the two. It will take place on the 4pm show.

Mercedes Martinez pinned Jody Threat with the Air Raid Crash. This was Martinez’s return to the company after being released by WWE earlier this year. She’s held the SHIMMER Championship twice and is a one time  SHIMMER Tag Team Champion (with Cheerleader Melissa).