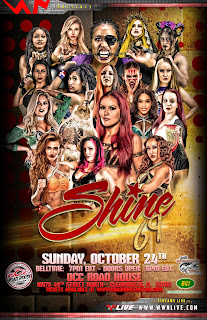 There were major signal problems on the FITE live stream so the first two matches did not air on it. We were told The Coven team of Harlow O’Hara and Vipress beat Myka Madrid and Alyx in a tag team match, and Natalia Markova beat Erica Torres. Apparently everything was fine overall on the Club WWN simulcast.

Trevin Adams and Alyssa Marino are the broadcast team with Ayla Fox doing the ring announcing.

Amber Nova best SHINE Nova Champion The WOAD by Disqualification after refusing to listening to the referee’s instructions and then knocking him out with a headbutt. The WOAD was going to squash Nova in the corner while the referee was unconscious but Santana Garrett ran in and made the save. Garrett hit The WOAD with a chair and told the cameraman that she wants the Nova Title. It’s the only title she hasn’t held yet in SHINE.

Kelsey Heather pinned Tiffany Nieves after a driving front leg sweep. Marino said Nieves has had about 5 matches so far and she was a last minute substitute for ACR who is injured. Heather acted like she was going to congratulate Nieves afterwards on her first match in SHINE but it was a swerve. She threw glitter in her face instead.

Santana Garrett pinned Kaci Lennox after the Shining Star Press. As the two were congratulating each other after the match, The WOAD attacked them from behind with a chair. She gave Lennox the corner running hip attack while Garrett watched on helplessly. Garrett recovered and brawled to the back with The WOAD as the referees tried to pull them apart.

SHINE Champion Ivelisse beat Stormie Lee by Python submission in the main event. They shook hands after. Fox interviewed Ivelisse in the ring. She said Ivelisse is the longest reining champion and she was going to announce the next title challenger for her on 11/14/21 at WWN Supershow: Battle of the Belts. Before she could tell Ivelisse who it was, Natalia Markova came out and briefly confronted Ivelisse as the show went off the air.

Ivelisse harangued on social media the last few days over her #132 ranking in the ridiculous PWI Top 150 Women Wrestlers issue. It’s a kayfabe and tabloid magazine that still manages to stay in business in 2021.It should never be taken seriously by fans or anyone in the pro wrestling industry yet it always causes animosity and disappointment.