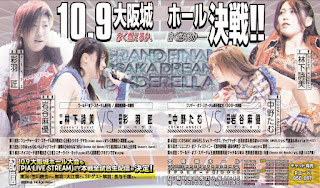 Konami is out due to illness so the scheduled match of her vs. SWA Champion Syuri in UWF Rules for the title will not take place today. Syuri will now be doing guest commentary for this broadcast but STARDOM says that match will still take place a later date.

This is the first time STARDOM has done an event at Osaka-Jo Hall and the first joshi event here since AJW’s “Wrestling Queendom 3” way back in 1993. This is the last event to have the milestone STARDOM 10th Anniversary and Osaka Dream theme. The Osaka show on 12/18/21 at Edion Arena will be called “Osaka Super Wars”.

The show is only in Japanese commentary. It’s the usual $40 USD plus taxes and fees and only available to watch and order until 10/12/21. It will then be available on STARDOM World as VOD.

There is a limited capacity crowd and fans are spaced well apart because of the ongoing virus pandemic.

They are showing the pre-show match for free on YouTube as well as the opening match of the ppv which will be the Future of STARDOM Title match.

Rina and Saki Kashima beat Lady C and Waka Tsukiyama when Kashima pinned Tsukiyama after a facebuster finisher in 5:43 of the pre-show match.

Kashima immediately got on the mic after the win and challenged Syuri to a match. Syuri hardly had time to sit down to do commentary and was shocked by the challenge. She agreed and STARDOM executive producer Rossy Ogawa made it official for later on in the show. It will be for the SWA Title and also for #1 con. to the World of STARDOM Title.

Marvelous Pro’s Chigusa Nagayo is also on the broadcast team. Takumi Iroha of Marvelous is challenging World of STARDOM Champion Utami Hayashishita in the main event today. The winner of that match goes on to face Syuri at the big STARDOM Dream Queendom show at Ryogoku Sumo Hall on 12/29/21. (Rin Kodokura and Maria of Marvelous are in tag team action here as well).

Ruaka won the Future of STARDOM Championship from Unagi Sayaka after the Freezer Bomb diving body press for the pin in 8:17 after outside interference from other Oedo Tai members. They pulled the referee out of the ring and attacked Sayaka. Lady C got in the ring to interrupt the title celebration and challenged Ruaka for a title shot.

Starlight Kid had an impressive entrance. She came out dressed all in white then disappeared off the stage by getting lowered down into the floor. She popped back up several seconds later dressed all in black to head to the ring.

High Speed Champion Starlight Kid pinned Fukigen Death after the Black Tiger’s Divine Punishment in 5:47. After the match, she taunted Death who was dizzy on the mat and put a black mask on her head.

Maika, Himeka, and NatsuPoi are the new Artists of STARDOM Champion. They defeated Tam Nakano, Unagi Sayaka, and Mina Shirakawa on 10/3/21 in Nagoya. Today is their first defense.

Artists of STARDOM Champions Maika, Himeka, and NatsuPoi beat Momo Watanabe, AZM, and Sayaka Kamitani when Maika pinned Kamitani after the Michinoku Driver II in twice in a row in 16:36.

Hazuki’s return to STARDOM match is next. She retired from the company on December 24, 2019. They aired a great video package of her history with Koguma. Koguma returned to STARDOM back in March after being gone from pro wrestling for six years.

Hazuki pinned Koguma after a brainbuster in 11:39. After the match, Hazuki thanked Koguma for the match and asked her to be her tag team partner in the Goddesses Tag League tournament which starts on 10/17/21 at Korakuen Hall. Koguma cried as she accepted.

Wonder of STARDOM Champion Tam Nakano went to a 30-minute time limit draw with Mayu Iwatani. They brawled near ringside at one point during the match and both took a turn shoving the referee down. The referee did not disqualify them or count them out, but decided to shove them back into the ring instead. Unagi Sayaka came out after the match and wants to be Nakano’s next challenger. She said she beat Nakano during the 5-STAR Grand Prix and deserves the shot. Nakano agreed.

World of STARDOM Champion Utami Hayashishita pinned Takumi Iroha after the BT Bomb in 30:52. After the match, Hazuki came out to challenge but was interrupted by Maika. It set up Hayashishita vs. Hazuki for the 11/3/21 show in Kawasaki and that winner vs. Maika on 11/27/21 show in Tokyo. This show ended with Syuri having a stare down with Hayashishita.