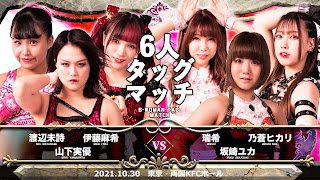 Rika Tatsumi, Raku, and Yuki Arai beat Yuki Aino, Marika Kobashi, and Haruna Neko when Tatsumi pinned Neko after Twist of Fate. After the match, Tatsumi asked to have a match against Arai on 11/25/21 at Korakuen Hall. Arai was honored and eagerly agreed. They shook hands. Tatsumi then gave her a cheap shot slap and left the ring. Aria looked on shocked and broken hearted.

Miyu Yamashita, Maki Itoh, and Miu Watanabe went to a 20-minute time limit draw with Yuka Sakazaki, Mizuki, and Hikari Noa. After the match, Watanabe said she wanted to face Noa in a singles match. Noa said she will put the International Princess Title on the line in their match which will take place at Korakuen Hall. Miyu Yamashita and Maki Itoh will challenge Sakazaki and Mizuki for the Princess Tag Team Titles on that show.