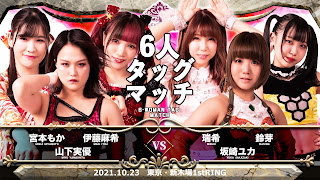 They announced TJPW Inspiration 3 will take place on 12/10/21 at Shinjuku FACE with Mahiro Kiryu vs. Haruna Neko, Pom Harajuku vs.Trans-Am Hiroshi, Hikari Noa vs. Nao Kakuta in a Hardcore Match, Yuka Sakazaki and Mizuki vs. Yuna Mizumori and SAKI.

Shoko Nakajima and Hyper Misao beat Yuki Aino and Haruna Neko when Nakajima pinned Neko with an inside cradle. Neko looked close to pulling an upset a few times with a series of inside cradles. The finish came when Neko had Misao in an inside cradle, but Nakajima “faked” her out by acting like she was counting to three when the referee was out of position. Neko thought she won the match and Nakajima took advantage of the distraction.

Sakisama and Mei Saint-Michel beat Nodoka Tenma and Raku when Mei pinned Raku in the La Revolution double team finisher. Sakisama got on the mic and said she and Mei were going to head to France for a vacation.

After the main event, Itoh asked Yamashita to address Sakazaki and Mizuki who are the current Princess Tag Team Champion. Yamashita said she and Itoh wanted a title shot and politely asked for one. Sakazaki simply said “No.” and started to leave the ring with Mizuki. Itoh took control and asked for the title shot assertively. Sakazaki agreed. The match will take place on 11/25/21 at Korakuen Hall.