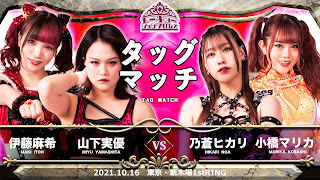 Mizuki, Nodoka Tenma, and Yuki Aino came out during the opening announcements. The company announced shows upcoming for 1/8/22 in Kobe (Mizuki’s hometown) and 1/9/22 in Okayama (Tenma and Aino’s hometown).

Miu Watanabe, Hikari Noa, and Raku came out to perform songs to warm up the crowd.

Shoko Nakajima won a 3-Way Match over Pom Harajuku and Raku by pinning Harajuku with a crucifix right after Harajuku hit Raku with the Pom de Justice.

Miyu Yamashita and Maki Itoh beat Hikari Noa and Marika Kobashi when Yamashita pinned Kobashi after the Attitude Adjustment while Itoh held Noa in a crab hold to stop her from making the save.

After the match, they cut a victory promo and playfully bickered because Yamashita retained the title over her at Wrestle Princess 2. Itoh said they have a lukewarm friendship and it will continue.