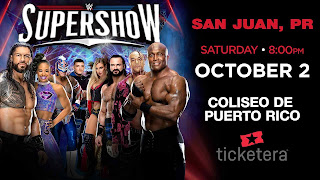 Dominik Misterio pinned Jinder Mahal after a 619 immediately followed by a frog splash.

Shotzi Blackheart and Tegan Nox beat Tamina Snuka and Natalya Neidhart when Nox pinned Neidhart after the Shining Wizard as Blackheart did a dive on Snuka from the ring to the floor to stop her from making the save. This win was acknowledged by WWE social media teasing that it possibly puts them in line for a future WWE Women’s Tag Team Titles match.

Drew McIntyre, Finn Balor, and Cesaro beat Roman Reigns, Jimmy Uso and Jey Uso when Drew pinned one of the Usos after the Claymore Kick.

WWE Raw Women’s Champion Charlotte Flair pinned Rhea Ripley after the Natural Selection (when Ripley charged Flair in the ring corner but Flair moved out of the way).