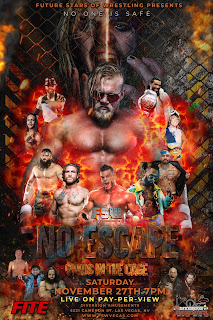 Future Stars of Wrestling “No Escape” results from Las Vegas, Nevada, USA 🇺🇸 at Diversion Amusements on 11/27/21 live on FITE:

Four matches will be held inside a steel cage tonight.

Toa Liona and Juicy Finau (with MK) won the FSW Tag Team Titles in a 3-Way Tag Match over Shogun SOS and Hero Leu, and FSW Tag Team Champions Cutthroat Cody and Jakob Austin Young when Finau pinned Cody after a double team finisher after MK got on the ring to distract Cody.

Graves beat Tom Lawlor by TKO with a choke hold in a Natural Born Killers Match where you could only win by submission, knockout, or TKO.

FSW Heavyweight Champion Hammerstone   went to a no-contest with Brian Cage when MK sent Finau and Liona in the ring to attack after several minutes of action. Hammerstone and Cage teamed up to double team clothesline Finau out of the ring followed by a double team suplex to Liona.

Intermission to give the crew time to set up the cage.

A video aired to announce Killer Kross and Scarlett are coming in for the FSW Mecca event on 2/4/22.

Remy Marcel pinned FSW Nevada State Champion CLAS after a springboard frog splash to win the title in the first of the cage matches.

Jai Vidal won an Escape The Cage Match over Midas Kreed, Jordan Cruz, Brandon Gatson, Tomaste, and Danny Limelight to earn a future FSW No Limits Title shot. The rules were the first person to escape by over the top or out the cage door wins. Vidal went over the top.

Matt Vandagriff pinned Damian Drake after a Spanish Fly off the top rope into boards covered in thumbtacks between two chairs in an Unguided Warfare Cage Match. Boards, a noose, and other weapons were inside the cage with them. Drake immediately speared Vandagriff into one of the boards before the bell rang. Vandagriff later hit him in the face with a 2x4 wrapped barb wire then threw him face first into a chair. Drake was busted open. Drake recovered a bit and gave him a swinging chair shot to the face. Vandagriff put a trash can over Drake and gave him a frog splash for a near fall. When the pin attempt didn’t work, he tried to escape the cage but Drake gave him a low blow followed up by a Dragon Suplex off the ropes. Vandagriff later gave him a brain buster on the top turnbuckle.

Chris Bey pinned FSW No Limits Champion Ice Williams after a flying cutter off the side of the cage to win the title in the main event cage match. He had to fight off the other members of Williams’ heel stable near the end of the match when they entered the cage to help Williams.