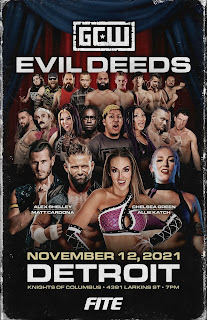 Kevin Gill and Emil Jay are the broadcast team.

Matthew Justice and Effy beat Alex Zayne and Tony Deppen when Justice pinned Zayne after a splash into two tables set up in the ring.

Gringo Loco pinned ASF after a Falcon Arrow off the top rope.

Atticus Cogar and Eddy Only beat Jordan Oliver and Nick Wayne when Cogar pinned Wayne after a driving bulldog. Wayne finished the match alone after Oliver was attacked in the middle of it by other members of 44OH- Gregory Iron and Eric Ryan.

Allie Catch beat Chelsea Green by cross face submission using Green’s own cast for leverage. Green cut a promo before the match. She said she couldn’t compete because of an injured arm and then she took off the cast and attacked Catch with it.

Alex Shelley pinned Matt Cardona with help from Effy and Allie Catch. The first referee was accidentally bumped then Chelsea Green ran down to pull a second referee out of the ring. Catch and Effy ran in to even the odds.

The GCW crew came out to put several light tubes into the ring for the final two matches which will be death matches.

Rina Yamashita pinned Charli Evans after Splash Mountain into several light tubes in a Death Match. They started off trading off giving each other light tube shots over the head. Evans used a broken end of a tube to cut into Yamashita’s forehead. Both bled but Yamashita’s face looked the worst. They mixed in hard hitting and high impact wrestling exchanging suplexes and lariats. Evans gave Yamashita a snap suplex on several tubes. Yamashita brought in the big garden rake lined with several tubes and popped it over Evans’ head for a near fall.

Countless light tubes were tied around the ring ropes before the final match of the evening.

Alex Colon and Masashi Takeda beat Jimmy Lloyd and G-Raver in a Tag Team Death Match when Takeda pinned G-Raver after a double team finisher. G-Raver gave Colon a top rope meteora as Lloyd held tubes to Colon’s chest. Takeda brought in a big pair of scissors to cut G-Ravers’ head. G-Raver dove off the stage and put Colon through a table below. Takeda couldn’t break a pane of glass over Lloyd so he did a senton into it to break it himself.