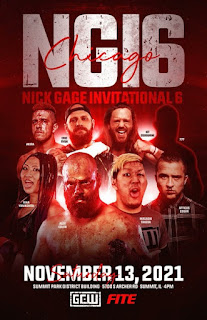 Kevin Gill and Dave Prazak are the broadcast team. Emil Jay is the ring announcer.

Four death matches in the first round of the NGI6.

Atticus Cogar pinned Rina Yamashita after putting skewers into her forehead followed by the headlock driver in a NGI6 Match. They both bled. Lots of crazy stuff with the light tubes. They bashed the rakes of tubes over each others. Cogar gave him a gin and tonic into a pile of tube. Yamashita placed several light tubes on his chest and gave him a top rope splash. Cogar picked her up and drove her back first into a tower of tubes set up in the corner. The coward gave Yamashita a standing ovation afterwards and the loss was viewed as an upset.

Charli Evans won a 3-Way NGI6 Match over Shlak and Kit Osborne by pinning Osborne with a small package while Shlak was down on the floor. Light tubes and barb wire boards were the weapons. Shlak was cut and bleeding from from a potentially dangerous area of his wrist. The referee tapped him up and he was able to continue.

Kirby Alexander is guest ring announcer for the next match.

Alex Colon beat Akira by with a camel clutch/referee stoppage in a NGI6 Match. This went on for a long time and the crowd loved it. They started off by fighting with knifes in the ring. It turned into a brawl on the floor for several minutes. Colon put Akira in a chair on the floor and charged at him with a light tube. The light tube didn’t break so he tried it again with a running start from further away and those broke over Akira’s chest. They went back into the ring with some high flying moves by Akira and Colon trying to ground him with light tube shots. Colon brought a knife out and cut Akira’s head with it. Colon placed tubes against Akira’s head and gave him a super kick. Arika did a senton with light tubes behind his back.

GCW UltraViolent Champion Masashi Takeda pinned Eric Ryan after punching light tubes into him during the pin cover in a NGI6 Match.

Effy and Allie Catch are now the broadcast team.

Gill and Prazack are back on commentary for NGI6 semifinals action.

Alex Colon beat Charli Evans by camel clutch/referee stoppage in a NGI6 Semifinal Match. Colon gave Evans a big superplex into a pane of glass between two chairs but Evans kicked out at one to a huge pop from the crowd. Colon then smashed her over the back with several light tubes and hooked in the camel clutch for the win. Colon raised Evans’ hand in respect afterwards. Rina Yamashita was shown in the crowd cheering Evans on. The crowd gave Evans a standing ovation and chanted her name.

GCW UltraViolent Champion Masashi Takeda pinned Atticus Cogar after slamming him into a package of light tubes in a NGI6 Semifinal Match. Gregory Iron and Eddy Only ran in to try to help Cogar. Jordan Oliver made the save and fought off the 44OH members with a crutch. Takeda retained the title all the way to head to the finals against Colon.

There was a long intermission to set up the ring for the main event finals. All of the ropes have light tubes tied to them and there are boxes of weapons in the ring. Ladders with light tubes sandwiched between the rung are on the floor as well as tables set up between chairs and panes of glass.

Alex Colon beat GCW UltraViolent Champion Masashi Takeda by camel clutch submission to win the title and the NGI6 Tournament Finals. Colon was a real bloody mess and the referees had to bandage him up on the floor during the match. After the match, Colon cut a victory promo but was attacked by John Wayne Murdoch who hit him from behind with a bunch of light tubes.