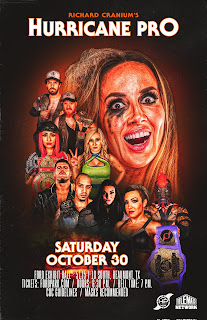 Sammy Kiss is the play by play announcer.

Jordan Jensen pinned Tama Ku by using feet on the ropes and the referee didn’t see it.

HPW Heavyweight Champion Edge Stone pinned Steve Maclin after using the title as a weapon when the first referee was accidentally bumped. A second referee ran down to check on the injured referee and didn’t see Stone hitting Maclin in the face with the title.