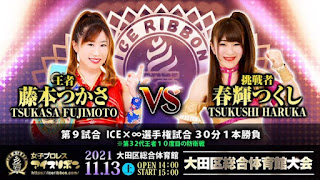 Hamuko Hoshi and Mochi Miyagi beat Miku Aono and Mono Kohgo when Hoshi pinned Kohgo after the Ham Roll in 9:58.

Makoto pinned Yuuki Mashiro with an Ebisu Drop in 11:03.

Maika Ozaki won the Triangle Ribbon Title over Rina Shingaki (the champion) and Totoro Satsuki by pinning Shingaki after a Weightlifting Slam in 11:01.

Ibuki Hoshi pinned NATSUMI in 8:42 after the Ibuning Star.

Akane Fujita defeated WUW World Women’s Champion Thekla by referee stoppage in 12:25 to win the title when Fujita held Thekla in the POM Juice submission hold. This match was also for #1 con. to the FantastICE Title currently held by Rina Yamashita (who’s in the USA now with GCW and was victorious last night at the GCW show in Detroit over Charli Evans in a Light Tube Death Match).

Tsukushi Haruka pinned ICEx Champion Tsukasa Fujimoto with the Japanese Ocean Cyclone Suplex in 27:14 to win the title. After the match, Manami Toyota got in the ring and put the belt around Haruka’s waist. The locker room came out to close the show with Toyota, Haruka, and Fujimoto in the center of the ring. Suzu Suzuki will be the first challenger for Haruka. This is the second top title run for Haruka in the company. The last time she won it was back in Feb. 2013 in a tournament after the title was vacated by Maki Narumiya due to injury. She is also currently the IW19 Champion.