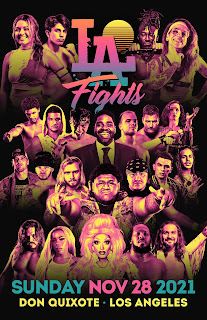 This group is under the Game Changer Wrestling banner as their new west coast company just like their Jersey Championship Wrestling on the east coast. Each brand uses pro wrestling talent from around their regions.

Ron Funches and Sean Waltman are the broadcast team. Jordan Cassel and Pollo Del Mar are the in-ring hosts for the crowd. Josh Shibata is the ring announcer.

Matt Vandagriff pinned Damien Drake with a Styles Clash after catching Drake diving off the ropes. They gave each other a fist bump in respect afterwards.

Juicy Finau pinned Bad Dude Tito after the Juicy Driver. Tito destroyed Finau with doors around the ring during the match. He cracked two doors over Finau’s head then threw a chair right in his face. Finau was bleeding around his nose. Tito then speared him into another door set up in the corner of the ring.

Intermission to clean up the ring. Funches said the Scramble Match will be up after it.

Jai Vidal won the Scramble Match over Lil Cholo, Judas, D Rogue, Hunter Freeman, and Ray Rosas by pinning Rosas with the Power Bottom Bomb. “Hot Tub Guy” Shawn Scoville did guest commentary with Waltman for this. He has a photographic memory when it comes to SoCal pro wrestling history and the current scene.

Jack Cartwheel pinned Brandon Gatson after a Shooting Star Press. They shook hands afterwards. Waltman put over the new generation of pro wrestlers. He said they’re more athletic than they were in his generation. He said tells people it’s no longer good to be great because everyone is great.

Dark Sheik pinned Sandra Moone after a cutter in the main event.