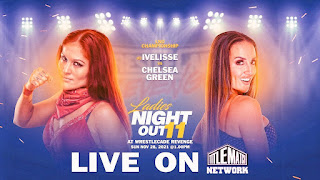 Sammy Kiss and White Mike are the broadcast team.

The Renegade Twins (Charlette Robyn and Robyn Renegade) beat Sahara Se7en and La Rosa Negra by pinning Se7en after The Renegade’s Revenge double team finisher. The twins came out with the Mission Pro Wrestling Tag Team Titles and the CCW Tag Team Titles. Both of the those brands can also be seen on Title Match Network.

Lady Frost pinned Alisha Edwards with a cradle when Edwards tried to use Kendra the kendo stick as a weapon. Edwards hit her with Kendra after the match. This was a first time ever match between the two. Kiss mentioned Frost is the current Hurricane Pro Wrestling Women’s Champion. He’s the play by play announcer for HPW and it’s another indie group that Title Match Network airs.

Diamanté won a 4-Way Match over Kolbe Max, Amber Nova, and Freya The Slaya by pinning Max with a Code Red.

Jordynne Grace pinned Kiera Hogan with the Grace Driver. Grace came out with the Impact Wrestling Digital Media Title. There was an impressive spot that popped the crowd as Grace got Hogan in an O’Connor Roll and bridged up to give Hogan a deadlift German Suplex. Grace raised Hogan’s arm and they hugged.

Mercedes Martinez pinned Vipress after a dominator slam. This was billed as a first time match between the two.

Kenzie Paige and Ella Envy beat Dream Girl Ellie and Riley Rockette when they both pinned Ellie after a double team finisher. This was supposed to be a regular rules match but the referee had no control from the start and it broke down into a Texas Tornado Match.

Thunder Rosa beat KiLynn King by choke submission. The announcers said Rosa had some of the longest lines for the meet and greets at WrestleCade and put her over as one of the most popular pro wrestlers on the scene. Rosa got on the mic afterwards and thanked the crowd. She said it was her first time at WrestleCade. She said she’s worked LNO shows before in the past and there were only a few fans but today they drew over 300 or 400 people (impressive for a Sunday afternoon show and on a long weekend of pro wrestling). She said in 2022, her Mission Pro Wrestling and Title Match Network hopes to bring women’s pro wrestling to even more places in the USA and hopefully around the world.

Savannah Evans pinned The WOAD after a full nelson slam.

LNO Champion Ivelisse pinned Chelsea Green in a controversial finish. Green had it won with the Unprettier but Diamanté pulled the referee out of the ring during a very near three count. Ivelisse took advantage the distraction and hit her finisher on Green for the pin.

This show was the most fun to cover out of North Carolina this weekend. It moved along at a brisk pace from one match to the other and wrapped up in a little over two hours.