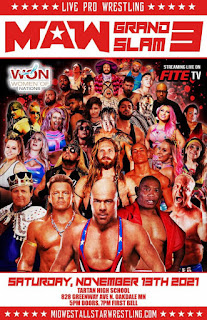 This show was in association with Women of Nations, a group that offers shelter and support services. For more information and to donate to WON click here https://women-of-nations.org/

SDW Northern States Champion Garrisaon Creed pinned Derek Stone with an inside cradle as Stone tried to slam him.

Ken Anderson pinned Rampage Santana after the Mic Check. They shook hands and then Anderson teased giving him another Mic Check but patted him on the back instead as a joke.

The Gand Slam Rumble is next for the inaugural MAW TV Title. Two start off then another enters every 30 seconds. Pins and Over The Top Rope for the eliminations.

Jerry Uhlricher and Joey “Jet” Avalon are the first two in.

Max The Impaler and Heidi Howitzer beat Heather Monroe and Ray Lyn when they both pinned Monroe after a double team finisher.

Delilah Doom pinned Laynie Luck after a superplex followed by a Falcon Arrow.

Paul Virk pinned 2 Cold Scorpio when X interfered and pushed Scorpio off the top rope. Virk capitalized with a fast kick to the back of the head for the pin.

Missa Kate pinned Mazzerati after a roundhouse kick to the face. This was for the Women of Nations Cup. Brooke Havok was originally supposed to be in this against Kate but she suffered an injury a week ago. Members of Women of Nations came out to present the cup to Kate.

Jerry “The King” Lawler pinned The System after the piledriver in the main event. Lawler got on the mic after and said history was made because “The System just got beat by a 71-year-old man!”