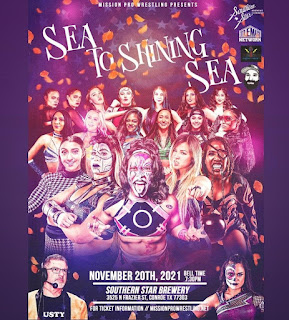 They have Brittani Nikole in the ring announcer spot for this one while Sam Leterna and the platitudinous Denise Salcedo (Wrestling Observer and other pro wrestling websites contributor) are on play by play and color commentary. Nikole has proven to be peerless in pro wrestling announcing on the indie scene so these broadcasts really suffer when she’s not on the call.

Thunder Rosa came out to the ring and thanked the fans and sponsors. She acknowledged Mark Henry and other members of the Busted Open Radio crew sitting in the crowd.

KiLynn King pinned The WOAD after a face plant finisher.

Jazmin Allure beat Skye Blue after The Renegade Twins interfered. The feed briefly went out and didn't catch the actual finish of the fall. Allure got on the mic afterwards and demanded a MPW Title rematch against Holidead. There will be a #1 con. 7-Way Scramble Elimination Match on 12/11/21 with Allure against six others to be announced.

MPW Champion Holidead pinned Madi Wrenkowski after the Tombstone Facebuster. This was the first defense for Holidead.

Once again an MPW show features the ongoing Thunder Rosa vs. David LaGreca feud. LaGreca is the host of Busted Open Radio. He is the corner person for Laynie Luck who is going against Rosa in the main event tonight. Thunder Rosa came out with David’s wife Violetta LeGreca as her corner person.

Thunder Rosa pinned Laynie Luck in a Falls Count Anywhere Match after a Thunder Driver on a chair in the ring. They had chairs, trash cans, and boards in the ring as the weapons. The stipulation of the match was LeGreca had to get a tattoo on his backside if Luck lost. Rosa would have had to get one on her backside if she lost to Luck. Violetta LeGreca turned on Rosa during the match and stopped her from hitting David with a chair. David then hit Rosa over the head with a trash can lid. Rosa recovered and speared David into a wall stacked with hundreds of beer cans on it, which made for a very good visual as they all fell down around them.

After the match, Rosa made David LeGreca come into the ring. She had him pull down his pants and wrote on his bare backside with a magic marker. When she was done she thanked him and Busted Open Radio for their coverage of MPW and helping them grow. David put over the company and the roster on the mic. They hugged in the ring. Rosa raised Luck’s hand in respect.

The next event is 12/11/21 in San Antonio in association with Hybrid School of Wrestling at the Salvation Army to benefit the Salvation Army Peacock Boys & Girls Club and to collect toys for the Angel Tree drive. It will air live on Title Match Network. Thunder Rosa teaming up with her teenage son Anakin Rosa against Ashley D’Amboise and JP Harlow was previously announced for that show but it wasn’t confirmed tonight. No other matches but the #1 con. match were announced tonight. 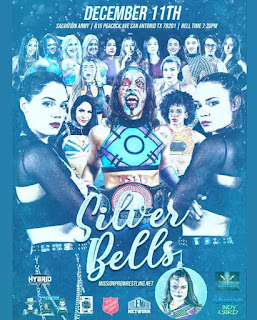