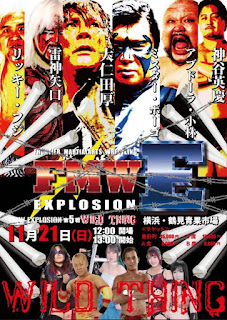 FMW-E held their “Wild Thing” event in Kanagawa at the Tsurumi Fruit and Vegetable Market on 11/21/21. The fiery explosions in the death matches were louder and more vivid than their last time at the venue. All of the noise and sparks concerned citizens in the nearby area enough to call the police and fire department. Authorities did come out to investigate to make sure that there wasn’t some sort of a dangerous incident threat to the public. FMW-E issued a public apology for the disruption.

Here are the results of the show:

Akane Fujita beat Risa Sera after a hit from an exploding bat in a Women’s Current Explosion Princess Tournament semifinals match in 10:14.

Hikaru Sato, Rocky Kawamura 2, and Taison Maeguchi beat HASEGAWA, Riki, and Kosaku Tonozaki when Sato got the fall on Tonozaki in 19:38.

The next show is 12/19/21 with Suzuki vs. Fujita in the women’s tournament finals.