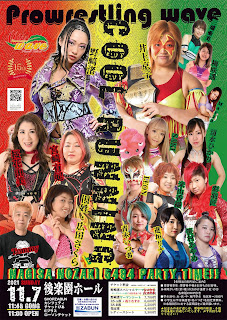 W.W.W.D. Queen Elizabeth Champion Yumi Ohka won a 3-Way over Leon and Kaori Yoneyama by pinning Yoneyama after the Big Boot. After the match, they set up Yoneyama getting another shot at the title on 12/1/21 at Shinkiba 1st Ring on the condition that the third person in that match isn’t from WAVE and they must be 40 or older.

After the main event, Nozaki’s trainer Etsuko Mita and other NEO Japan Women’s Pro Wrestling alumni Misae Genki, Yoshiko Tamura, Mina Taniyama, Yuka Nakamura, Aya Watanabe, and Ayako Ishida came out to the ring. They gave Nozaki flowers and congratulated her on her milestone anniversary. NEO was the promotion Nozaki debuted with in 2006. The company ran from 1997 to 2010.