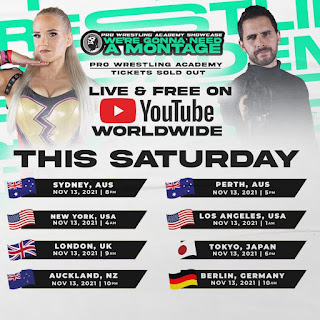 The Velocities (Paris De Silva and Jude London) beat Jack Pain and Backman when De Silva pinned Backman after a Shooting Star Press. The Velocities cut a promo after and said they want to face any tag team from Melbourne City Wrestling on Dec. 3

Kai Drake pinned Shazza McKenzie with a Michinoku Driver in a #1 con. Tournament Match when Michael Spencer interfered from outside the ring and attacked McKenzie.

Kingsley won a 4-Way Match over Jimmy Townsend, Rhys Angel, and Xander Sullivan by referee stoppage when she had Townsend in a submission hold. Unsocial Jordan, Aaron Jake, and Bel Pierce came out after the match to speak with Kingsley. Jordan said he didn’t think it was good for kids to hear that Kingsley’s team is called Bad Bitch Nation. He challenged her to a match for Dec. 3. He said if her team loses, they must change their team name.

Aaron Jake and Bel Pierce beat Will Kedis and Cherry Stephens when Jake pinned Stephens after a double team finisher.

Unsocial Jordan pinned Mick Moretti after a flying knee strike in a PWA Heavyweight Title #1 con. Tournament Match. Aaron Jake and Bel Pierce got into the ring to congratulate Jordan as the show went off the air.

The next live shows are on FITE. Dec. 13 with the 4-Way Match finals of the #1 con. tournament. Dec. 19 is “Worlds Collide” with PWA vs. Melbourne City Wrestling.