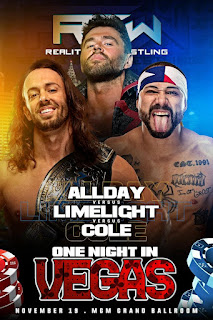 Booker T’s Reality of Wrestling “One Night In Vegas” results from Las Vegas, Nevada, USA 🇺🇸 at MGM Grand Ballroom on 11/19/21 broadcast on YouTube:
They opened with a brief interview with ROW Heavyweight Champion Will Allday outside. He said he will kick someone’s head off and be Will All Night for one night in the 3-Way Match main event against Cam Cole and Danny Limelight.

Brad Gilmore is the play by play announcer and Booker T is doing color commentary..

Disco Inferno came out to the ring. He is the guest host of the event. He ran down the card for the crowd. He said he has a surprise for everyone but won't reveal what it is until later on.

Jay Alexander pinned Terrale Tempo after hitting Tempo in the chest with both knees as Tempo came off the ropes followed by an over the shoulder drop finisher.

Abel Andrew Jackson cut a promo on the streets of Vegas. He said he was going to bet it all and re-start his campaign.

Kenny King pinned Titus Alexander after the Royal Flush. King got on the mic after the win and said there’s a Texas Title Tournament going on now. He wants to challenge whoever wins it. Jay Alexander came out and said he’s winning the tournament. He said Kenny better be careful what he asks for because he might get burned.

Jonny Lyons beat Clay Roberts by submission with a cloverleaf.

Doc Gallows came out to surprise the crowd. The announcers said he was not scheduled to be there. He said this was the first time indie wrestling has been held at MGM. He said ROW is the best indie promotion. He used the time to plug Impact Wrestling’s “Turning Point” show which was on 11/20/21 at Sam’s Town. Then he called out Booker T. Booker stood up from the broadcast table and told Gallows he’d deal with him next time. He ordered security to remove Gallows from the building. Gallows refused to be taken out. He beat up the security team and left on his own.

Danny Limelight did a backstage promo to hype up the main event.

Disco Inferno was back out to the ring to talk about his surprise but Bret The Threat came out to interrupt him. Disco didn’t know who he was. Bret said he’s not afraid of Disco or anyone else in ROW. The Boogeyman’s music played and he came out. Bret tried to fight but Boogeyman chokeslammed him. Disco said Boogeyman wasn’t the surprise but drinks were on the house. He mockingly shook the hand of Bret who was barely conscious on the mat.

Another Abel Andrew Jackson video was shown. He was gambling hoping for a good fortune.

Mazzerati came out to do guest commentary for the Diamonds Title match.

Diamonds Champion Raychell Rose pinned Promise Braxton after the Off With Her Head finisher. Mazzerati got in the ring and pulled Rose off the ropes from behind while she was celebrating the win. She laid Rose out with a big boot and then taunted her with the Diamonds Title.

Cam Cole did a backstage promo talking confidently about the main event.

A final Able Andrew Jackson segment aired and he lost all of his money gambling.

ROW Heavyweight Champion Will Allday won the 3-Way Match over Cam Cole and Danny Limelight by pinning Limelight after the Autograph super kick just after Limelight knocked out Cole with brass knuckles.