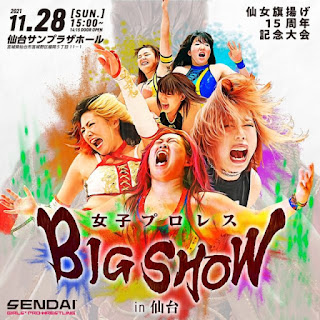 Yuu won the handicap match over Sakura Hirota and Eiger by pinning Hirota after the Cannonball in 4:58. The stipulation was Yuu would lose if she didn’t win the match within 5 minutes.

Mika Iwata pinned Andras Miyagi after a triangle kick in 10:59.

DASH Chisako pinned Hibiki in the Hardcore Match after the Hormone Splash off of a makeshift scaffold placed between two ladders in the ring as Hibiki was covered under a pile of chairs for extra impact. Time of the fall was 20:35.

Sendai Girls World Champion Chihiro Hashimoto went to a 30-minute time limit draw with Takumi Iroha. They bowed to each other afterwards and want to have a future rematch.