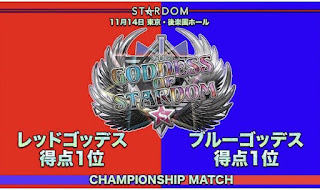 Rina and Hanan beat Unagi Sayaka and Mai Sakurai in a Red Block Match for 2 points when Rina pinned Sayaka after interference from Oedo Tai in 5:19. This was the first win of the tournament for the two sisters who finish at 1-4 with 2 points total. Sayaka and Sakurai finish at 2-3 for 4 points total.

Hazuki and Koguma beat Utami Hayashishita and Saya Kamitani in a special Red Block points tiebreaker match for 1 point extra in 5:27 when Hazuki pinned Kamitani with the Hazukistral. Hazuki and Koguma head to the tournament finals to face the Blue Block winner.

Starlight Kid and Ruaka beat Syuri and Maika by Disqualification in a Blue Block Match for 2 points in 8:01 when Syuri punch and kicked the referee in chaos action. The referee was bumped in the match. While he was down, Fukigen Death and Saki Kashima interfered and held Syuri on the ring apron as Kid and Ruaka attacked Maika’s arm with a few chairs. Syuri was able to break free and she ran wild hitting anyone who got near her to save Maika. Kid and Ruaka finish with 3-1-1 for 7 points. Syuri and Maika finish with 6 points.

Momo Watanabe and AZM beat Mayu Iwatani and Rin Kadokura in a Blue Block Match for 2 points in 13:13 when AZM pinned Kadokura with the Azumi Sushi. They have 7 points each as well but based on the rules Watanabe and AZM win the Blue Block and advance because of “direct confrontation” against the other teams in the win/loss records.

Hazuki and Koguma beat Momo Watanabe and AZM to win the Tag League Finals when Koguma pinned AZM with a German Suplex in 15:28. After the match, Starlight Kid came out and continued to confront Watanabe about joining Oedo Tai. That set up a match against the two for the 12/18/21 show. The loser of the match has to join the winning team’s unit.