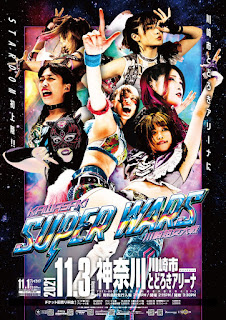 This pay-per-view is only being broadcast in Japanese and it will only be available to order and view until 11/6/21. It will be posted up on STARDOM World on 11/8/21.

Mai Sakurai pinned Waka Tsukiyama after a face buster in 6:23. After the match, someone wearing a Halloween mask got in the ring and attacked them both with a couple of cheap shot  hits from what looked like a pipe or sledgehammer. The mystery person then casually staggered back to the locker room. This match aired free on YouTube as well.

Future of STARDOM Champion Ruaka pinned Lady C after the Freezer Bomb diving splash in 4:21. Mai Sakurai and Waka Tsukiyama got in the ring after the match and were just fine despite getting attacked a few minutes earlier on the show. They both want to be the next challenger of Ruaka.

Fukigen Death and Saki Kashima beat Rina and Hanan when Kashima pinned Hanan after the My Emblem in 5:44. Rina turned on her sister Hanan during the match and joined forces with Death and Kashima after Hanan accidentally drop kicked her while aiming for Kashima. Rina celebrated the win with Kashima and Death then left the ring with them. This was a Red Block match in the Tag League Tournament so that means 2 points for Death and Kashima with the win. Rina and Hanan have 0 points so far in the tournament.

Mina Shirakawa won a 3-Way Match over Saya Kamitani and Maika by pinning Kamitani after the Implant DDT in 7:38.

They announced a show for 1/29/22 in Nagoya at Dolphin’s Arena. That will be an 11th Anniversary event.

Mayu Iwatani and Koguma went to a 15-minute time limit draw with NatsuPoi and Himeka just as it looked like Himeka was about to pin Iwatani after the running powerbomb. Koguma picked up the shaken up Iwatani afterwards and carried her to the locker room. This was a non Tag League tag team match.

High Speed Champion Starlight Kid went to a Double Count Out brawl with Momo Watanabe in 11:50. After the match, Kid cut an arrogant promo and invited Watanabe to join Oedo Tai. Watanabe refused. Koguma then came out to be the next challenger. Giulia was on guest commentary. She’s been out of action with a neck injury since early September but the hope is she will be able to return for the big 12/29/21 show.

SWA Champion Syuri beat AZM by submission with the White Tiger in 13:22. Syuri cut a promo and said she’s still waiting for Konami to have a match against her but Konami is still sidelined with an illness. Himeka came out to be the next challenger.

Wonder of STARDOM Champion Tam Nakano pinned Unagi Sayaka with the Twilight Dream in 21:31. They hugged afterwards. Mina Shirakawa grabbed the mic and wants to be the next challenger. She spoke in both Japanese and English. They shook hands in agreement. Shirakawa then left the ring to help Unagi Sayaka to the back.

Goddesses Tag League Tournament 2021 action continues tomorrow at Korakuen Hall. It’s a big week with shows on 11/6/21 and 11/7/21 as well. All three of those events will air by midweek as VOD on STARDOM World.